It was around a year ago this time when I shot my first ever sub-72, under-par round on a golf course. No, I’m not talking about miniature golf. This was a legitimate, 6,800-yard championship course that I would typically shoot in the 80s on. But everything came together and hard work paid off.

However, following that, a virus crept in, and I’m not talking COVID-19, although that closed down courses for a couple months. I started pulling the ball. I tried to adjust my swing to stop hooking it so much, and it only made things worse. It lingered through the summer and fall. My score went from sub-72 to close to 90. No matter how much I tried to cut the ball and move it back right, it kept going left.

I went on YouTube and experimented with about 100 different things, trying to get my pull to stop. Every time I thought I had it figured out, it came back. It just wouldn’t go away. Finally, after talking to some golf pros and even working with a coach, I refound my swing and fixed it all. Just last week, I got back to shooting close to 72 again.

I know a lot of you have been here. The double-cross is the worst feeling in golf and it’s perhaps the hardest “virus” to get rid of. The reason is your swing changes just enough that it becomes a routine and routines are hard to change. They take time and a lot of hard work. It’s why golfers go in slumps that sometimes they can’t get out. Rory McIlroy had a similar problem back in 2013. Jordan Spieth is going through a similar problem now, although his recent play suggests he’s overcome his swing faults. But he had double-cross issues, and next thing you know, he changed his swing and he was missing it both ways, which tends to happen when you try to stop a hook.

In order to stop your hook, there are five major things to consider and work on, not 100. There’s no need to change your swing. Just focus on the things below and keep it simple.

Here are five things to do when you are experiencing double-cross and hooking problems. 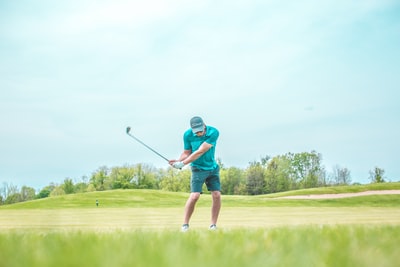 A hook is not going to go away overnight no matter how much you practice. It takes time. What I suggest doing is video tape yourself right away when your hook is at its worst and compare it either your swing you had when it was right (when you had that) or a professional golfer’s swing and study what you’re doing wrong. Most likely, your club is getting off plane somewhere. Where is it going wrong? If you’re not hooking it and your swing is fine, still videotape yourself. It won’t be long before you go through a slump. We all do.

Once you’ve figured that out, you know what to focus on. Take videos from multiple angles, including the side so you can also see whether your arms are going through the ball correctly and extending out. Also, are you releasing your club properly?

Most golfers on the PGA Tour do just as much as work at home as they do on the practice range. They are always video taping their swing and talking with their coaches about it in front of a computer or television set. Their coaches analyze it and tell them what to focus on.

2. Relax your grip and swing

This was perhaps my biggest issue. When comparing my swing before and after, I was trying to grip it and swing it with more force. I tried to control the golf club too much and my grip would get tighter and tighter. Some of that had to do with me playing softball on the side;former baseball players are the ones most likely to succumb to double-crosses.

The right hand in your grip should be more relaxed. Try loosening it and let your left hand be the more controlling hand in your swing. When you’re at the driving range, relax your right arm and just let it rest on the club, your right pinky resting softly on your left index finger (or inside of it if you use an interlocking grip), not pressing hard against it.

Also, relax your swing some. When you try to kill a golf ball, you tend to pull it more because you’re coming on top of it and your head is moving. Your shoulders are also turning, leading to more of a pull (more on this in number 2). A golf ball is not meant to be murdered unless you're Bubba Watson or John Daly. The best golfers in the world have the most easy-going swings. Watch Louis Oosthuizen or Ernie Els hit a golf ball. It looks like there’s barely any effort to it. They have very soft grips and easy-going swings.

Take a bucket of balls and just swing easy, loosening your grip and letting your left hand control the club more than the right.

This is definitely a baseball player's biggest nightmare because hitters turn their shoulders. Golfers tilt until the follow through. You don’t necessarily turn your body until after striking it. The problem many pullers of the golf ball have is they begin turning their shoulders too early and not coming down enough on the ball. Your golf swing should be completely up-and-down, not left-to-right. When you turn your shoulders on the downswing, the club gets off the plane and you come over the top of it, and as a result, the ball goes dead left.

In order to accomplish this, focus on tilting your shoulders with your right shoulder going as low as it can go at impact. If you have a gym membership somewhere or a home gym at your house, the pulley exercise is perfect for this. Practice your golf swing using your pulley and focus on tilting your shoulders up and down, not left to right, in the backswing and downswing. This gets your motion back correctly. Also, focus on dropping that right shoulder as low as possible as you push your body weight forward. You can also incorporate number two into here and loosen your grip. You almost want your right shoulder to go directly down to the ball at impact. This is where a lot of your power comes from as well as your accuracy. 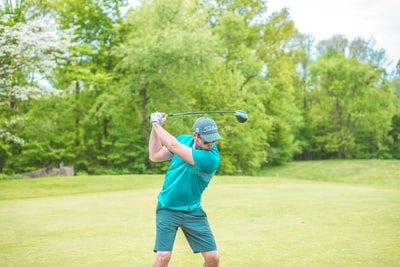 4. Is Your Alignment Correct?

If your ball is going straight left, not even starting straight, then chances are your club is not properly squared or you’re lined up wrong. Alignment problems are very common amongst golfers and they lead to wayward shots. There are a couple ways to correct this.

One alignment technique I do is before every shot, I hold my club straight out to the target, covering the flag. That’s the straight line between you and the flag. Then I pick a spot just a few feet in front of my ball and use that as my target. If I’m on the practice range, I’ll actually put a tee or marker just a few feet in front of me as a spot to aim at. If you draw or fade the ball, obviously you’ll want your aiming point to be slightly right or left.

Another common tip is to parallel your stance with the sticks. Put one stick in front of the ball and one behind it, directly parallel to the flag. This helps you more with your stance, keeping everything lined up accordingly. You see this more common on practice ranges with players trying to align themselves correctly.

Believe it or not, I never took a golf lesson in my life until last year. My hook that I was experiencing was the worst “virus” of my life. I couldn’t figure it out. I finally decided to go to a PGA Tour Pro who was able to video tape me and break down my swing and what I was doing wrong, many of the things all mentioned above. My shoulders were turning, not tilting. I was gripping the club way too tight, and as a result, not properly releasing and letting the club do its work. I was also standing further away from the ball, and thus, the baseball swing came in easier.

Tour Pros are experts for a reason. They know more about the swing than you do. Trust them. Listen to them. They’re there to help you out and can put you back on the right path. I always say when all else fails, go to a Tour Pro. They may cost some money, but it’ll make you happier with your swing in the long run.